A bullet is a kinetic projectile and a component of firearm ammunition that is expelled from a gun barrel during shooting. It is in an unguided form with no directional control once released from the barrel. So a bullet once released will hit at the same point on which it was fired without ‘knowing’ whether the target is still present or not.

A scientific paper on ‘Smart Bullet System’ was presented in a scientific conference of DRDO in 2015 where the intricacies of such system was detailed by Anmol P, Alok A. Jadhav, Ishan Naktode, Vishal S. Undre, Rahul N. Dhole, L. M. Waghmare. The proposed system can know and track the target and hit it just like a missile warhead. It can blow up in proximity of 2-3 meters of target sending shockwaves to disrupt it.

DARPA has been working on a similar bullet and advancements have been made. The bullet is named ‘EXACTO’ (Extreme Accuracy Tasked Ordnance). It rides on a laser beam fired from a designator.

The system presented by the young scientists in conference also uses the same system. But uses an explosive head. This makes it very useful in situations where assailants are hiding behind the walls or hard structures and are in greater numbers.

The young scientists should be encouraged and such systems of future to be made available for the military at the earliest. 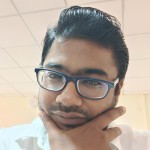